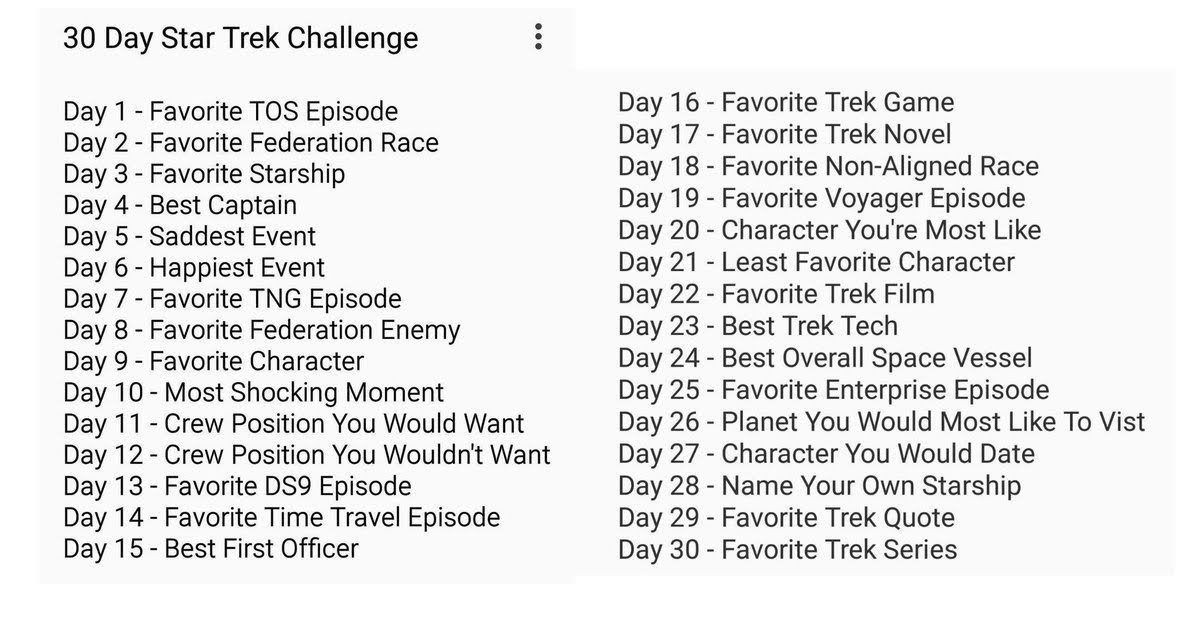 August 25 2019
This is so cool! I can't wait to see all your responses. I'm about to sleep now, so I will think on my answer and post them tomorrow first thing while at work. :P
Unknown Person liked this

1. The Corbomite Maneuver
2. Andorians
3. Nebula class
4. Captain Georgiou
5. Spock's death
6. Picard joining the crew for Poker at the end of All Good Things
7. All Good Things
8. Romulans
9. Weyoun
10. Janeway killing Tuvix
11. First officer
12. Transporter officer?
13. The Siege of AR-558
14. The Sound of her Voice
15. Chakotay
16. Star Trek: Judgement Rites
17. Haven't read any recently!
18. Vorta
19. Counterpoint
20. Chakotay
21. Barclay
22. The Motion Picture
23. Umm, starships
24. Prometheus class
25. North Star
26. B'aku (just to deal with a crowsfoot or two)
27. Ensign Connor
28. USS Tycho
29. "It's easy to cling to principles when you're standing on a vessel with its bulkheads intact, manned by a crew that's not starving" -- Cpt. Ransom
30. For me, Trek is a tapestry of every series.  I've watched TOS reruns the most, but I love the moral plays of TNG, DS9 and VOY.  Love Enterprise for the return to exploration and Discovery for capturing my imagination and giving me something new to think about and enjoy!
3 people liked this

August 26 2019
Oh Ensign Connor was a dream he was 3rd on my list.  And Spock was my favorite growing up mostly cause I only got to see the original cause TNG wasn't being aired in my area at a time I could watch.
2 people liked this

August 26 2019
This was so much fun to think of all the answers! Great idea, I really enjoyed this. Here are my answers:

August 27 2019
Not even the Enterprise episodes with Romulans?
Unknown Person liked this

August 30 2019
Day 1
Fav TOS
Well. let's see...Who Mourns for Adonais - Apollo oh my gods!
then there's the Doomsday Machine - for the tragedy of Decker
and Mirror Mirror of course too - a reflection of what could be
also Journey to Babel - for awesome Sarek and Amanda
Let that be your last Battlefield - the futility of war.

but most of all, all those where Kirk got his shirt ripped, torn and bare-chested...which turned me gay!!!
2 people liked this
Edited August 30 2019 by calx

August 30 2019
Day 30
TOS - without this, no other would be
TNG - grew up with this one
DS9 - well, the pew pew was actiony and fun right?
VOY - sweet sweet Harry, n the Doc n 7!
ENT - hated the first few seasons n then it got cancelled just as it was getting good
DIS - hating the first few seasons n waiting to see before passing final judgement
2 people liked this

Galaxy Quest is truly lovely
I have a little bag of it, which despite it being ripped (like Kirk's shirt) I still use to this day :)
Unknown Person liked this

A rather controversial decision...
3 people liked this

All of them! coz IDIC
Unknown Person liked this

i have been and always shall be your friend

i think it's in alameda?

what does god need with a starship?

So dis is goodbye...

Who fired that phaser?!?

to boldy go where no man...where no one...has gone before