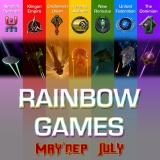 In the Rainbow Games all seven intergalactic factions compete for the victory by... Read More
With Stonewall Pride in full swing, May'Qep July presents the RAINBOW GAMES, a glorious PvP battle tournament for all factions! For all details please click read more!

In the Rainbow Games all seven intergalactic factions compete for the victory by fighting space PvP matches. But it's not just about winning the PvP, it is more important to play in the fashion of the factions philosophy. For example, the Dominion mostly cares about winning (victory is life and all...), while a Ferengi just doesn't want to die and the Federation always wants to heal and save everyone.

https://www.stonewallgaming.net/photos/170872
Every players faction gets determined by their ship. If you fly a Romulan ship you are part of the Romulan faction, a Cardassian ship is part of the Cardassian faction and so on. The aligned small species count as their allegiance, so an Andorian ship is a Federation ship and a Lethean or Gorn ship are Klingon ships, but the Maquis Raider would be a Neutral ship. You can choose freely which faction you want to join by the choice of your ship, your captains species does not matter. Only the ship decides it all!

During the PvP matches, players score individual points according to their faction achievements:
https://www.stonewallgaming.net/photos/170870
Every player can earn a maximum of three points per match if they achieve all of their factions achievements. In every team, one player will have the most kills, died the fewest times, dealt most damage or healed the most. If whatever they achieved is an achievement for their faction, they get one or two points.
If a Federation player has healed the most within it's team, they achieve two points. A Neutral player would get one point for being the best healer of their team while a Klingon player who does the same would get no points at all.
A specialty here is the Dominion achievement for least deaths. It is called "Save the founder" and since the founders may not die, for the Dominion getting killed the least times does not count, they have to achieve zero deaths to get that achievement.

At the end of the event, we will find out which faction has won! Since the factions can have different sizes (for example, if 6 of us play as Klingons and only 2 as a Romulan) the results of each match get calculated by adding all the individual player scores within one faction to the faction-sum and then multiplying the faction-sum with the number of players this faction is smaller than the largest faction.

In our example, the two Romulan players would add their individual scores together and multiply this with 4, since the largest, Klingon faction has four players more.

All players of the winning faction will receive one Stonewall Credit. Additionally, the three players with the highest individual scores will receive 3, 2 and 1 SWC.

Come join us in the rainbow battle of colors, uniting all factions in some special fun PVP action!